TIFF 2019 celebrates the 50th anniversary of the legendary festival in the unique site of Arkhai Sculpture Park, Vlaha village.  Woodstock: Three Days that Defined a Generation has just premiered at the Tribeca Film Festival  and revisits the story of the 3 day music event and how it succeeded in changing the way a whole generation approached music, arts, politics and social rights.  At a moment when outdoor festivals hardly happened, 4 young entrepreneurs, two business types and two hippies, decided to start an event that had all chances to fail. Even the stage construction had been ended minutes before Jimi Hendrix started his concert, still they eventually something bigger that had ever imagined: Woodstock would change America and the whole world.

Special guest for this celebration night is Oigan and its already popular show Oigan Plays Dylan. The young artist of Cluj (RATB, Kumm, Moon Museum) will perform songs of one of his musical idols, Bob Dylan. 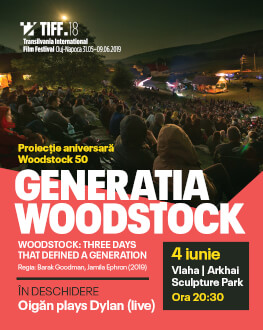