Weekend at The Castle - Proiecții speciale

Not suitable for minors

The presence of the American superstar Nicolas Cage at the 18th TIFF edition is marked through a series of events that include the special screening of one of his most recent films, where he plays the main role. An original and strong horror, Mandy is the story of Red Miller, a man hunted by his past that lives in the mountains and ends up hunting, one by one, the members of the religious cult that killed the love of his live – Mandy.

Cage’s acting is amazing, a strong role in a film where many scenes are at the limit between nightmare and madness, testing, once again the actor’s talent to switch, in an instant, different states, exploring each aspect of his character.

A must-see for the fans of the horror genre.

This screening is not recommended to underaged viewers. 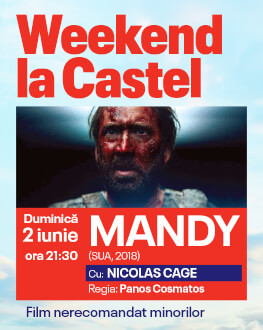