Film food: Virgin and Extra: Jaén, the Land of the Olive Oil

The fascinating story of a staple of the Mediterranean diet comes to life in José Luis López-Linares’s most recent documentary Virgin and Extra: Jaén, the Land of the Olive Oil, which was screened at San Sebastián Film Festival in 2018. A spectacular journey through Jaén and a chronicle of the Spanish olive oil Paradis history.

Starting 8:15 PM, at Bricks Restaurant,  the screening will be followed by a dinner supported by Lidl and prepared by Chef Florin Dumitrescu and Chef Bogdan Vandici, the youngest winner of the most popular Romanian cooking-show contest. During his successful career, Florin Dumitrescu worked for more than 25 restaurants around the world, and also, he had the chance to cook for great cinematographers as Nicolas Cage – TIFF’s special guest this year, Francis Ford Coppola, Wesley Snipes or Jean Claude Van Damme. Bogdan Vandici was his student and recently won the silver medal at Young Chef Olympiad 2019 – the biggest and the most important competition of the youngest cooking talents. 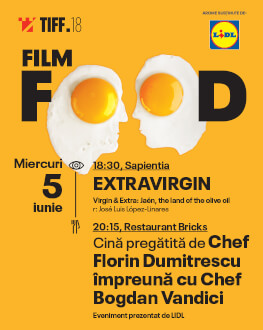