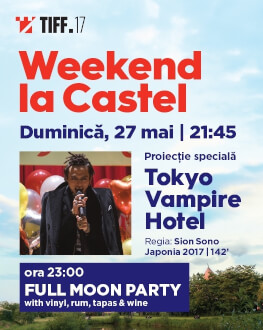 The first TIFF weekend will end with the premiere of Tokyo Vampire Hotel, made by Japanese director Sion Sono, inspired by local myths and partly filmed in Cluj and Turda salt mine. "Had it not been filmed in Romania, the series would not have had this power", said l'enfant terrible of Japanese independent cinema, who fell in love with Transylvanian legends on his first visit in Romania at TIFF 2016.

The famous Japanese actresses Kaho, Ami Tomite and Lorena Koto can be seen in leading roles and many of the mysterious characters from Tokyo Vampire Hotel are played by Romanian actors, part of the production team of the Amazon co-produced series being made up by film professionals from Bucharest and Cluj Napoca.