Film Food: A Taste of Hunger 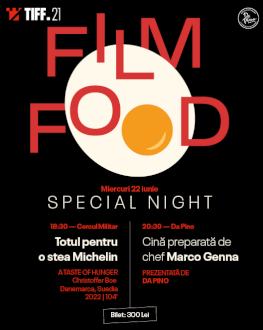 18:30 – A taste of hunger (Christoffer Boe) at the Military Circle

Film lovers and gastronomy enthusiasts will have a real surprise on Wednesday night, at the screening of the film A Taste of Hunger (directed by Christoffer Boe). Among the protagonists, viewers will recognize Nikolaj Coster-Waldau, one of the stars of the Game of Thrones series, in a position in which they have never seen him before.

Infidelity and the ambition to achieve perfection risk destroying the harmony of the couple that his character forms with Maggie, played by Katrine Greis-Rosenthal. They love each other, have two wonderful children and run their own gourmet restaurant, Malus. Although they don't seem to be missing anything, their dream is to get the most important form of appreciation in the world of gastronomy - the coveted Michelin star. To fulfill this dream, they are able to sacrifice everything.

The screening of the film will be followed by a gourmet dinner prepared by chef Marco Genna. Originally from Sicily, he became known in Romania with the participation in the 2022 edition of the MasterChef cooking show, where he impressed the jurors and reached the final. Before settling in our country, Chef Marco Genna traveled and worked throughout Europe, exploring different cultures and experimenting with local ingredients. During the special event that will end the dinner series inspired by the films from the Film Food program, chef Marco Genna will offer those present a real demonstration of fine dining.