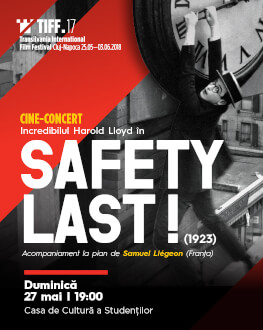 About a century after its launch, Safety Last! (1923) is still considered by critics to be one of the most beautiful silent movies, and the TIFF audience will be able to watch it accompanied by the live music of pianist and organist Samuel Liégeon (France).

The artist, who seduced the public in Europe and the US with his musical improvisations, won 1st prize at the prestigious Boëllmann-Gigout international competition in Strasbourg in 2008, and in the following years he has distinguished himself in international improvisation competitions in Leipzig, Harlem, Münster and Chartres. The magic of his music will accompany live the images of the legendary Safety Last!