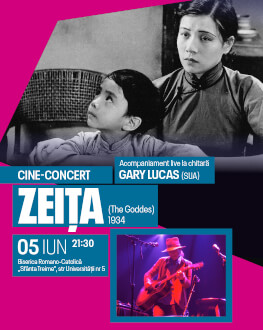 A world class guitar hero, Gary Lucas returns to Romania after his 2010 highly acclaimed Dracula show (1931, d. George Melford) with Transilvania IFF. This year, Lucas will play live his unique compositions inspired by the classical mute film The Goddess. Directed by Wu Yonggang with Ruan Lingyu as main actress, The Goddess is one of the best known films of China’s cinematic golden age.  The film tells the story of a woman, who is street walker by night, devoted mother by day, fighting to get her young son an education amid criminal and social injustice in China.

To compose the music performed live along with the mute film, Gary Lucas used all his extended studies on the Shanghai music culture during ”30s. The artist beautifully succeeds in recreating the atmosphere of the decade and the emotions of the touching story.

An international recording artist with over 30 acclaimed solo albums to date, Gary Lucas has also composed soundtracks for film and television, receiving many honors and awards.