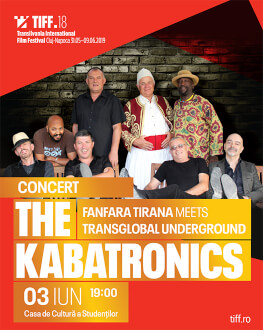 Two maverick groups, Britain’s eclectic Transglobal Underground and Albanian brass maestros Fanfara Tirana, teamed up in 2013 for a dynamic cross-border, cross-cultural jamboree. The result was the rise of a new music reality that Transilvania IFF has the pleasure to present for its 18th edition. Southern Albanian kaba meets reggae, drums meet electronic, and sitar strings embrace Iso-polyphony from the eagle’s nation and the results is astounding.

As The Kabatronics, they performed all over the world, playing in the biggest festivals, from Shanghai squares to Sziget in Hungaria, from India’s biggest festivals to every big event around Europe. They won or have been nominated to important awards such as Independent Music Awards, nomination in the long list for Grammy as Best World Music Album, and many more. One simple search online and you can discover over 100 reviews with 5 and 4 stars in magazines and news papers allover the globe as The Times, The Guardian, The Independent, Rolling Stone, Il Manifesto, Mondomix, JazzThing Magazine, fRoots, Songlines, confirming their unique talent.