TIFF 2020 features an absolute premiere in Romania: two composers, conductors, and performers have accepted to score Carmine Gallone’s silent gothic melodrama Malombra (1917). Julie Roué (France) and Simona Strungaru (Romania) will each unveil their own version live at the Military Club in Cluj-Napoca — on two consecutive days. The event is organized in partnership with the La Rochelle Cinéma festival in France, which is famous for its ciné-concerts — and which will host a second iteration of the event.

Suffused with tension and emotion, Malombra is a silent diva melodrama typical for its time — and one of the early films made by Carmine Gallone in Italy. In the gothic atmosphere of a castle, Marina di Malombra (played by Lyda Borelli, a famous figure at the time) discovers a letter from a woman who appears to have been killed by her uncle. She begins identifying with her and seeks revenge.

The film will be first shown with an experimental techno pop score on May 30th at 7 PM, at the Military Club in Cluj-Napoca, when Julie Roué will perform live, in premiere, together with percussionist Stan Delannoy. Julie Roué plays the piano and the guitar in addition to other instruments, which include a wide array of objects she comes across: shells, bottles, metal boxes, etc. She creates an experimental fusion of jazz, electronic, and world music, with strong pop influences. She has composed the original score for over 40 films, including several Cannes winners, and launched her first electro-pop album, About Luke, last year. 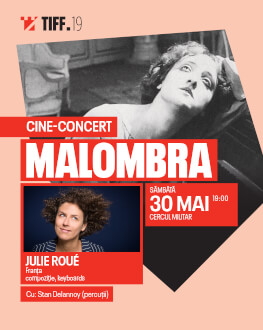