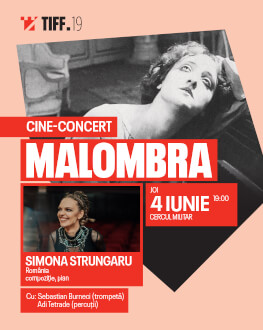 TIFF 2020 features an absolute premiere in Romania: two composers, conductors, and performers have accepted to score Carmine Gallone’s silent gothic melodrama Malombra (1917). Julie Roué (France) and Simona Strungaru (Romania) will each unveil their own version live at the Military Club in Cluj-Napoca — on two consecutive days. The event is organized in partnership with the La Rochelle Cinéma festival in France, which is famous for its ciné-concerts — and which will host a second iteration of the event.

Suffused with tension and emotion, Malombra is a silent diva melodrama typical for its time — and one of the early films made by Carmine Gallone in Italy. In the gothic atmosphere of a castle, Marina di Malombra (played by Lyda Borelli, a famous figure at the time) discovers a letter from a woman who appears to have been killed by her uncle. She begins identifying with her and seeks revenge.

Known for her own classical, jazz, and electronic experiments, Simona Strungaru will perform her own version of the Malombra score on June 4th at 7 PM at the Military Club, together two other important Romanian musicians: Sebastian Burneci (trumpet) and Adi Tetrade (percussion). Simona Strungaru returns to TIFF after her memorable 2016 turn as the conductor of the Hungarian State Opera Orchestra accompanying the screening of Haxan at the Banffy Castle. A pianist, conductor, and composer, Simona Strungaru is a principal conductor of the Bucharest Jazz Orchestra and of Sonomania. She has composed a symphonic suites, live electronic and live street art, as well as soundtracks for animations and musicals. She has collaborated with major bands (Urma, Cobzality), artists (American trumpetist Alex Sipiagin), and orchestras, and last year she launched the project Firestarter by DIOSA (her horror film-inspired alter ego) by rendering Prodigy tracks for the orchestra at the Awake festival.