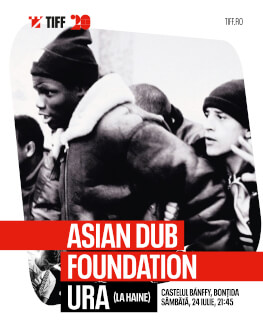 La Haine, the cult film for which Mathieu Kassovitz was awarded Best Director at the 1995 Cannes and three Césars, returns to the big screen accompanied live by the phenomenal Asian Dub Foundation. The story, no less current 25 years later, follows 24 hours in the life of three youngsters in a Paris suburb haunted by protests and police abuse. Kassovitz wrote the story as a reaction to the 1993 killing of a young immigrant by the French police, in a prefiguration of the events that generated the Black Lives Matter movement in the United States in recent years. Asian Dub Foundation are no accidental collaborators for this project: the staunch promoters of civil rights who mix dub, rap-core, dancehall, and hard ragga jungle with punk rock influences have recently returned to the British charts.

Sergei Polunin: Up, Close and Personal