With the participation of The Cluj-Napoca Hungarian Opera 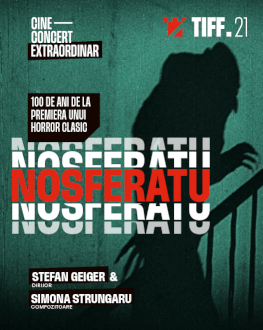 In 1922, a film changed cinema and defined the horror genre. 100 years later, the Transylvania International Film Festival brings it back to the big screen, in an exceptional cine-concert.

A restored version of NOSFERATU, the masterpiece of legendary director F.W. Murnau, will be screened at Bánffy Castle as part of # TIFF2022, the soundtrack being provided live by the artists of the Hungarian Opera Cluj.

NOSFERATU is based on "Dracula", the novel written by Bram Stoker.

Thomas Hutter is the secretary of a real estate agent in Wisborg, where he lives happily with his wife Ellen. One day, his boss sends him to Transylvania on business, to negotiate with Baron Orlok to buy a house. Ellen feels that something is wrong, she is aware of the danger that threatens her husband, but she fails to convince him not to leave. When night falls, Hutter meets Orlok, the strange master of the house ...

The film was restored by the Friedrich-Wilhelm-Murnau Foundation, Wiesbaden.

This project is co-presented by Goethe Institut & The German Cultural Center from Cluj-Napoca.